Update on revisions to the European PPE directive

PPE Directive 89/686/EEC is now over 20 years old. A new PPE regulation will reflect innovations and enhance consumer safety while ensuring fair competition between the companies. Granberg AS has embraced this updated legislation.

The PPE Regulation is mandatory and covers any type of product that falls into its scope, including protective gloves.

Our gloves satisfy the new criteria, and we are setting up our laboratory with new relevant equipment and training our employees to guide end users in choosing the right glove.

Granberg AS has become a member of European Safety Federation and will represent interests of the PPE industry in the institutions of the European Union.

A new revision of the EN 388 Standard is expected to increase the accuracy of testing as well as to enable consumers to acquire clearer information helping them to make the right choice in choosing their hand protection.

Only abrasion resistance and blade cut resistance will be revised in the new directive.

• Member states shall not impede the availability of products covered by Directive 89/686/EEC made available prior to 21st of April 2019. 1

• EC type examination certificates issued under Directive 89/686/EEC shall remain valid until 21st of April 2023, unless they expire before that date. 1

The abrasive paper indicated in the standard and used in the test, is no longer available in the market. Therefore, notified bodies have started using alternative paper according to their understanding. This situation has caused inconsistency of test results throughout the notified bodies and confusion within the market.

A new revision will define guidelines of choosing the abrasive paper and will ensure the same testing conditions.

Current EN 388 Standard is using Coup Test (shown below) method to assess cut resistance. During this test, a sample of tested glove material is prepared and laid on a flat surface.

During the test a rotating circular blade tracks back and fourth across the sample with fixed 5 N load until a cut-though is achieved.

The cut resistance of the sample is compared to reference cotton fabric and a Cut Index is calculated. 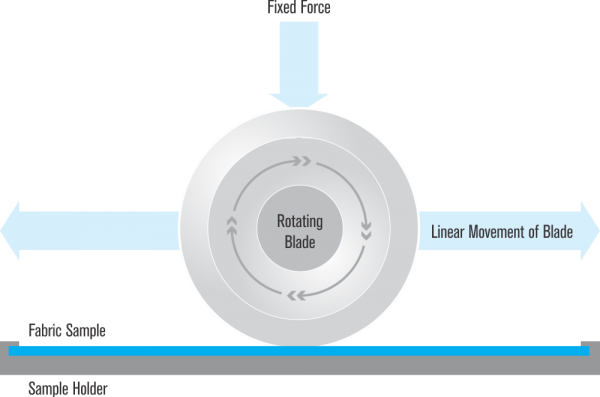 This test method has been used since 1994 and has its limitations.

New highly abrasive and cut-resistant materials, such as materials containing glass fibres or stainless steel, have reached the market.

These materials can often lead to dulling of the blades.

As a consequence, this test method is providing inconsistent and inaccurate test results with misleading information about materials with high cut resistance and high abrasion resistance.

The new revision of the EN 388 Standard will maintain the current Coup Test method for gloves that do not dull the blade. Materials that are noticed to dull the blade will be tested according to already existing EN ISO 13997 Cut Test Method, performed by a TDM machine.

This test method is created to evaluate protection level of highly cut resistant safety gloves by simulating an accidental single contact of a great force with a sharp object. It determines the force in Newtons (N) required to cut through the sample of material.

The adequate level of protection is expressed in levels A to F.

EN ISO 13997 uses a flat blade that is pressed over a sample of material attached to a slightly curved hard surface.

The principle of the test is to measure the load applied to the blade in order to make a cut-through over a 20 mm stroke length.

The blade tracks only a short distance and is replaced by a new blade after one time use, therefore dulling of the blade plays a considerable less significant part.

The gloves that have specific impact resistant properties on the back of the hand can be tested against an updated EN 13594:2015. This standard is created to asses protective gloves for motorcycle riders.

The tested glove knuckles are impacted by 2.5 kg load, creating impact energy of 5J. The attenuation shall give a performance of Level 1 as in EN13594:2015.

If the sample has achieved a result of Level 1, the letter «P» will be added to the results.